I’ve heard a lot about AA’s flagship 777-300ER business class product. It uses the same Zodiac Cirrus seat as is found on Cathay Pacific which I flew last year on my Around the World trip. I could not have been more excited to give this product a try and Miles has been staying up late researching it. In the end we were VERY impressed by what American is working with, and are very excited to share with you our American Airlines Business Class 777-300ER Review: Los Angeles to London Here are the specs from Seatguru. I typically check out the loved and hated seats prior departure, it’s a great tool that I recommend to every traveller. I was really debating between one of the private window seats and the mini cabin, but I will be reviewing the mini cabin later on in the year as I have another trip to London planned using Aadvantage miles ( at 50k pre deval) for a trip to see the Colts play at Wembley, and will review the mini cabin then. The seats on the 777-300ER are Zodiac Cirrus Twin Aisle designed by Zodiac Seats out of Texas, and are some of the most loved in the biz. I’ve been pretty excited about flying on American’s “next generation” business class since it debuted in 2014. Having flown Cathay Pacific’s reverse herringbone design last year, of which this cabin is modeled after, I was keen on experiencing it myself. The cabin crew know it too. They were proud of the product and it was like they were turnt up for the flight. Ok, yes it’s basically what Cathay has been using for years, but having flown Cathay biz last year, American trumps it. They found the little bits and pieces that needed a brush up and the improved them. Even the color palette has been fine tuned and juxtaposed with the lighting to create a real ambience. I’m gonna admit it – American Air felt sexy. Whaaaaaaaat?!

As a result, American has thrust itself from repping a horribly subpar, angled lie flat biz to now being amongst the best to Europe. In fact, even if I were flying a considerably longer flight to Asia I would be looking forward to flying this again.  Like, a lot. It’s also nice that they have updated the amenity kit to C.O. Bigelow products and a Cole Haan case. Very classy.

Traveling with just Miles, I found the window seat to be ideal and incredible. 2, nearly 3 windows all to myself combined with the reverse herringbone design and direct aisle access, it felt very private. More private than the aisle config – obviously because I didn’t have anyone sitting next to me, but I felt tucked away in my little pod.

I am curious to experience first class, but honestly, unless I was on a discounted biz fare again and had some system wide upgrades to spare, I’m not sure I’d burn the points. Biz was just so good. I also had some left over British Airways first class pjs that I brought with me and slid into those before boarding had even ended. I love getting comfy before a flight and there is something so luxurious about changing clothes on an airplane. 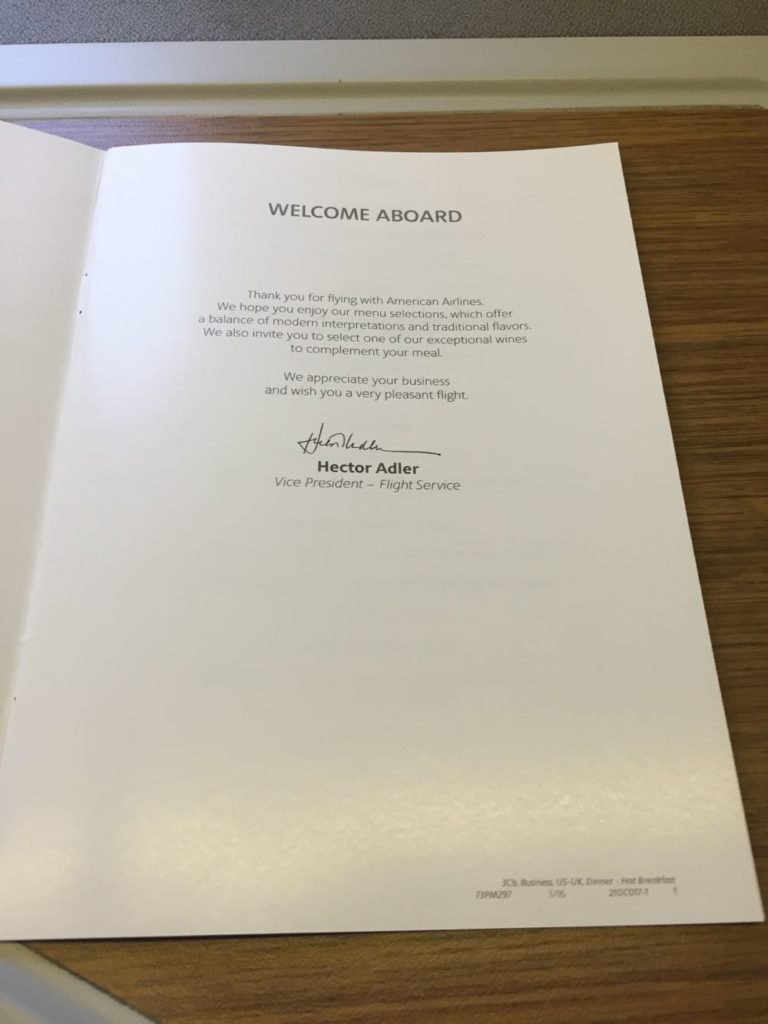 Prior to take off the we were served our choice of Mimosa, OJ, or champagne. Miles loves mimosas so we had a couple sips to celebrate our forward cabin experience. US based airlines get a really bad wrap when it comes to service. I found the service to be bright eyed, bushy tailed, and eager to assist. The purser was hands on in our cabin and even shared with me her personal choices for wine.

Roughly an hour into flight meal service started. The first two courses were served together. One was a delicious mushroom carpaccio on a bed of roasted red peppers and spinach. That was followed by a frisee, strawberry and goat cheese salad. These were both very good. I’m not a big frissee fan, but everything else was two thumbs up. I had preselected the pasta dish which was a cheese stuffed Saffron gnocchi. I have to say, American has taken their food to the next level. Flying 1st Class back from Tokyo last year, the food was barely edible. Greasy, slimy, and rubbery. This food – was deserving of seconds. Was it Babbo quality? No – we’re on a plane people!  But, it was good. Like I finished all of it good. The meal ended with some Ben and Jerry’s cookies and cream ice cream. It was tasty, but I’d be lying to you if I said I wasn’t slightly disappointed we didn’t get an ice cream Sundae! American is renowned for their 7 mile high sundaes. Oh well, maybe on the way back home. The screen is huge. The controls are both touch screen and remote controlled – I found the remote to work better for volume and toggling, and the touch screen for selecting content and playing it. The only thing I wish it did was tilt down so it was easier to view while in bed mode. Ohhhhhhh the problems we have lol. There was a bevy of entertainment choice. Tons of movies, tv shows, and music. I opted for two different movies: One, I started while we were on the ground and finished just after meal service – the 2nd, I started as I was having a glass of wine before falling asleep. I finished “ how to be single” when I woke up after sleeping for roughly 5.5 hours. It goes full 180. It’s long. I’m 6’ and I had plenty of leg room. In fact, pre-bed mode or Take-off/landing mode, the foot stool is so far away that I couldn’t even reach without slouching. I also believe the foot well is considerably larger than that of Cathay. I wear a size 12 and had no problem having my feet in any configuration. You get a small pillow and blanket. There is no turndown service – at least that I witnessed. Once in bed mode… It’s Comfy. Could be comfier, potentially with a light mattress pad like they rep on Japan biz, but it was comfy nonetheless. I found a specific place to wiggle and found myself not noticing various parts of the seat. I did sleep for 5.5 hours, so that says something. In fact, I think I was awoken by breakfast being served and could have rolled back over and slept longer but I smelled fooooood. But, with the provided ear plugs, comfy bed, and eye mask – I was out like a light and could have stayed out. I do have to say – I still carry around my Etihad eye mask. That thing is the best I’ve had so far. The American mask isn’t bad, and maybe I just have a big face, but the Etihad mask blocks out the most light. You’d do just fine with the American mask tho. I also love my BA first class pajamas, but prefer to carry them in my AA first class pajama bag. I got changed pre-flight in a nicely sized biz bathroom. *A note about the cabin temp – it was pretty moderate. Sometimes cabins get so hot that I toss and turn. I turned one air jet on and my little pod was cooler than the Fonz in a leather jacket. I didn’t use it on this flight, but it’s a great option to be able to fly over the ocean and still connect. Although, there is something nice about disconnecting and settling into your cocoon and disappear from the world for a bit. I wasn’t sure whether we would get fast tracked or not, and right before we landed, as they passed out immigration forms, we received the fast track passes. It was a little ambiguous to be honest. Virgin gives cards that are SUPER clear that you need to keep it and it’s gonna get  you through quick. American’s are almost like thank you cards. I saw several people leave their fast track passes in their pod. I’m actually regretting not swiping them and keeping them for my return from Italy where I’m flying economy.

Man, these things help out so much. I’m thinking of getting the British form of Global Entry as I will be visiting the UK at least 5 times this year, which I believe is the minimum number of entries needed to qualify, but Fast Track is fantastic.

We also had an amazing descent over the city

How did I earn so many miles?

I’m American Aadvantage Platinum Elite ( en route to Exec Plat this year). I was booked on a discount business “I” class fare. Let’s look at how the mileage stacks up for me