Three weeks ago, I flew on American’s 787-8, in the mini cabin, from Chicago to Shanghai as part of a #weekendwarrior trip to China. It was a fantastic buddy trip. The #weekendwarrior is fired up again, this time flying the same plane, on a different route, in the same business class, but a different cabin, to Beijing for the weekend. Thank goodness that Chinese visa is good for multiple entries over ten years. 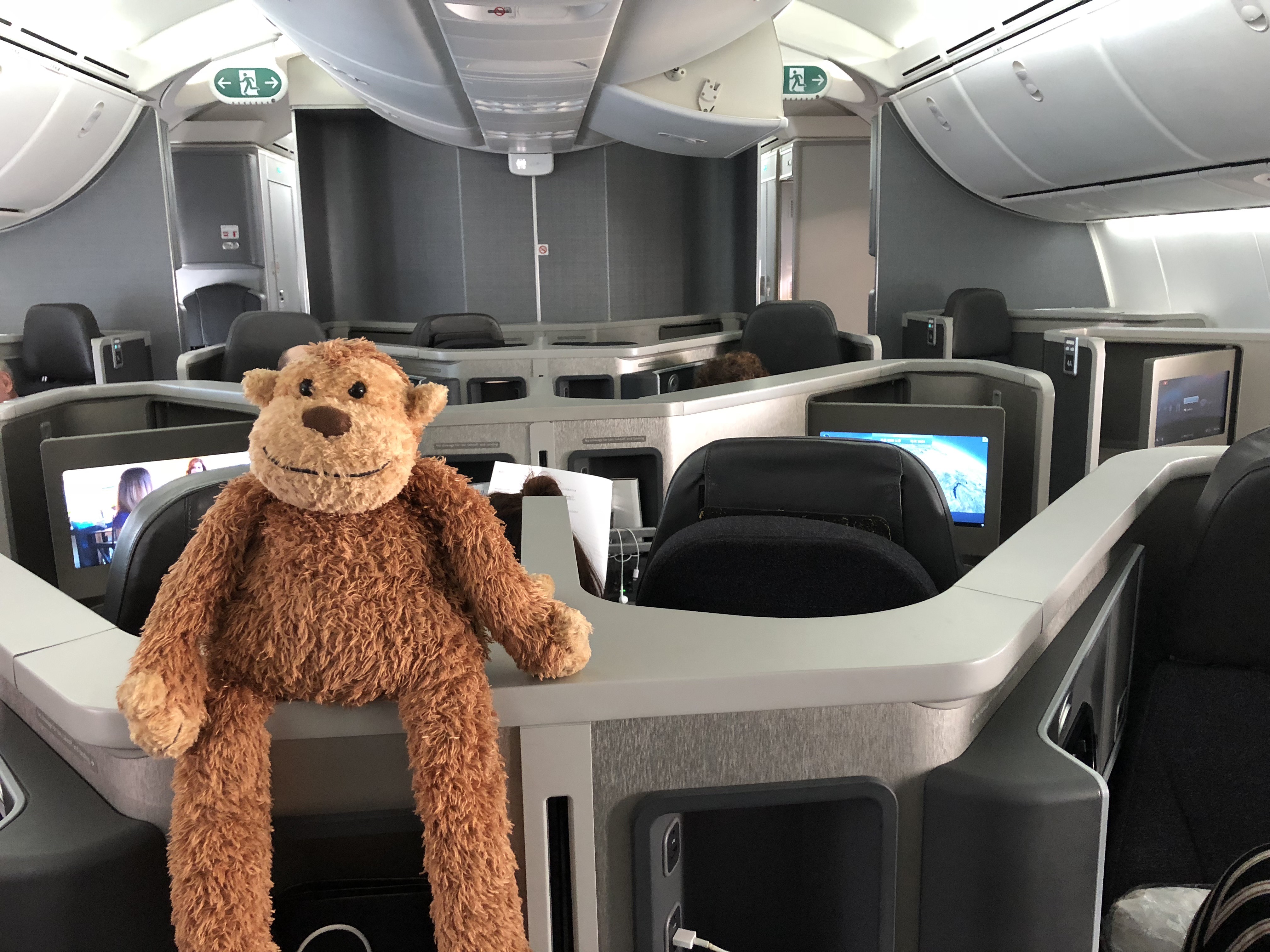 If you look on the left side of the picture, near Miles’ hand, you can see where the seat connects to the seat behind.

Since we are both Executive Platinum, One World Emerald, we utilized the new Flagship Check-in at Terminal 4.  It’s a pretty sweet way to check-in and is exclusive to a short list of passengers. Since we were Exec Plat and on an international ticket we were granted access.

Another on that list is Concierge Key. It’s always fascinating to me to see how these uber exclusive elites treat the staff. It just so happened that there was a pompous Concierge Key behind us that had to wait for us to be processed.  He was being VERY well tended to, but I could feel him seething, as us lowly Exec Plats stood in front of him.  Golly Gee Willikers I love when people like that have to have a little dose of reality.  He even managed to insult the fine dining Flagship lounge in JFK. If I could have checked in for an hour I would have 😉

I didn’t go. I probably should have, I’m a travel blogger, but I snuck over to Qantas and enjoyed a great start to a fast weekend in Beijing 😉

Gate 41 is extremely convenient for hopping over to TBIT for lounge access, as 41 is the first gate you see after returning from TBIT. You can see the row of vehicles used for Concierge Key/5 Star Service transport.

Casper bedding, middle seats. While I’ve flown biz in this configuration: in the middle seats ( on the 772 from LHR to ORD), and from Chicago to Shanghai ( on the window ) I haven’t flown in the seats that are connected.

WOW – it ain’t no lie people, the seats move a lot. While I’d read about this failure, I’d assumed it was the seats that were in the same row that were connected. Wrong, it’s the seats in the same line that are connected. This is why 1D and 1H aren’ t affected by the problem. Every seat in the D and H line aside from row 1 is paired and connected with the row behind them. I was rocked, wiggled, jostled, and bumped the entire flight.

Row 1. The left seat is blocked for Pilot rest. These seats aren’t joined, face backwards, and I’d say are one of the best sets on the plane. IFE was great, per usual, but the storage is definitely lacking. Compared to the Super Diamond or Cirrus seats there are very few options, intra seat, to store your stuff. Also, the first two rows block the overhead storage compartments, and you’re forced to store about the aisle seats. Big difference.

The other issue is that my seat basically had the passenger in 2L always in my periphery. The privacy is lacking, and the decision to swap out this cabin design for the B/E Super Diamonds was money well spent. Just for reference, here’s the Super Diamond that we flew from Los Angeles to Tokyo

Drinks prior to boarding. Champers, OJ, and Water. Prior to meal a drink cart came down the aisle offering a selection of juices, sodas, and wine. Service was very friendly, prompt, and very professional. American gets ragged on ( myself included ), but this was a very good crew who made me feel like they wanted me to be happy. That’s all you can ask for.

Prior to the flight I stuffed my belly in the Qantas 1st lounge ( Mimosa, Bircher mueslix, and a whole egg omelette with cheese and chives w/ sourdough – yummmmmmm). Needless to say, I wasn’t really that hungry.

I do enjoy the salad they serve with a spicy vinaigrette. I had that alongside a cheese plate and ice cream sundae with EVERYTHING.

I still think this product is the 3rd best American Business Class.  There is a big difference between where you choose to sit. Currently, 1D is blocked for pilot rest, so couples couldn’t sit in 1D/1H like I did in the past on the 772 configuration, and avoid the rocking sensation. This then creates a dilemma for those traveling together. Avoid the rock, or sit next to one another in the middle seats. On the return we flew in the last row of the mini cabin, in the middle seats, and I think I’d prefer those seats to these. The worst, the last row in the main business class cabin. They face the galley, where food is set up, and there is a lot of traffic in and out of the galley throughout the flight. Often time, the curtain is left open and light pours into those reverse facing seats.