HOT DIGGITY WE’RE FLYING AGAIN! After nearly 18 months of not hitting the international skies, we’ve banged out two stellar business class products within a couple weeks. Not gonna lie…it’s not at all the same.  The combination of jetlag and a mask give me a bad headache, but worth it if you ask me.

After flying British Airways new Club Suites over to England, I wasn’t really sure what we would ultimately fly home. United Polaris? Virgin Upper? We wanted direct and not a ton of fees. As luck would have it, a couple days prior to departure, I found AA business class seats available on the London to Chicago route that suited us perfectly.

I thought it’d make a good comparison since American’s 787-9 features the same seat, sans a door, that we flew over on BA. Simply put, if what you’re looking for in business class is an outstanding seat with ample storage, a comfy, long bed, and clean, easy to use IFE…it’s hard to beat the seats featured on either aircraft. They’re Super Diamonds manufactured by Collins Aerospace and may just be my favorite iteration of a reverse herringbone layout ( head out, feet in). For this reason alone, it’s why I rank these two business class products at the top of the TATL pile. American Airlines has had a lot of staffing issues of late resulting in numerous canceled flights ( we were the victims of this on the flight over ), but most of those have been within the USA. Luckily we didn’t have any issues and everything according to plan.

How I booked this ticket

Very simple and straight forward via Alaska Airlines. Leading up to the pandemic, since 2016, I’ve kept Alaska elite status and as a result have accrued quite a handsome amount of Alaska miles. We deployed 57.5k a piece + roughly $350 in taxes and fees. The first surprise was to find out we were scheduled to fly out of Terminal 5. We had spent the night at the Hilton Garden Inn Heathrow thinking we’d be out of terminal 3 and it’s be super easy. Silly me, I hadn’t even checked, but it didn’t really matter since the Sofitel is being used as a quarantine hotel which is the only other hotel connected to LHR. We simply hopped on the train and popped on over to terminal 5.

Before we were even let into the line to check our bags we had to show our negative PCR tests. As a head’s up…at the time of writing, you can now fly with Emed Binax Now at home testing, but only the ones sold online and has a virtual meeting with a doctor. We didn’t use this test; however, and booked with an outfit near Mayfair. There are literally loads that will do a 24 hour around.

Other than showing our test results is was business as usual and we were swiftly check in and on our way. I’ve reviewed this lounge before and it was up and running pretty much as usual with one big exception – waiter service.

Use a barcode to have your coffee, food delivered. Here’s a look at the menu.

We needed to take the train out to the 50s and arrived roughly 10 minutes prior to boarding. We lined up first to get some sick snaps…and mission accomplished. Look at this beautiful cabin. A lot of people don’t prefer the first row due to its proximity to the galley, but I love it. They put the snacks out by you, you’re in front of everyone, the champagne doesn’t run out, the food gets to you faster ( unless they do back to front ), etc. So…we picked row 1. One of the best attributes of the Collins Super Diamond seat that American uses on the 787-9 is the storage. Not only do you get two bins that pop open from the center arm rest, you also get one down by your feet for valuables and one in the arm rest that also serves as a shield to the aisle.

Bang and Olufsen noise cancelling headphones are a great touch and far superior to BA’s offering; however, they still come to collect them nearly an hour before landing. So aggravating when compared to other airlines that allow you to keep them until taxi. The screen is large but it’s the breadth of selection that makes flying AA enjoyable specifically in this regard. Not many other airlines compete with AA’s in flight selection of entertainment – massively dominates British Airways.

There are also power ports inside the main arm rest cubby and another control for the IFE – I mainly just use the IFE screen itself tho.

77 inches long and 21 inches wide. I’m roughly 6′ and 165lbs and there is plenty of room for me to lie completely flat and also have a decent amount of shoulder room. We received one pillow and a duvet provided by Casper. Quite comfy, but British Airways has better bedding from The White Company. However…United’s Polaris bedding from Saks beats both handily. I think American gets a bad rap for having tasteless food. We had chicken and salmon and both were quite good, and this was one of the few times where I ordered ahead and didn’t have to worry if they’d run out of what I want. I have a terrible habit, other than flying on Singapore Airlines, of being terribly remiss when it comes to in flight meal pre-selection.

A couple of hours after the meals were finished they laid out the snack basket right above my seat. Terrible, terrible idea. I had far more than I should have 🙂 The service was very good, the food quite tasty, and the seat is one of my favorites. All in all – it was a very pleasant flight and I’d rank this neck and neck with BA Club Suites, but alas, still give Club Suites the edge. BA has succinctly refined the customer experience. There is a decorum in the presentation of the bedding, the amenity kits, the food, etc that is just a notch better than AA. Oddly though, and this is much to my surprise, I may prefer the seat without the door. I’m flying BA Club Suites again quite soon and will report back on this, but the door on BA Club Suites is largely about bragging rights, and minimally impactful from a privacy use stand point. 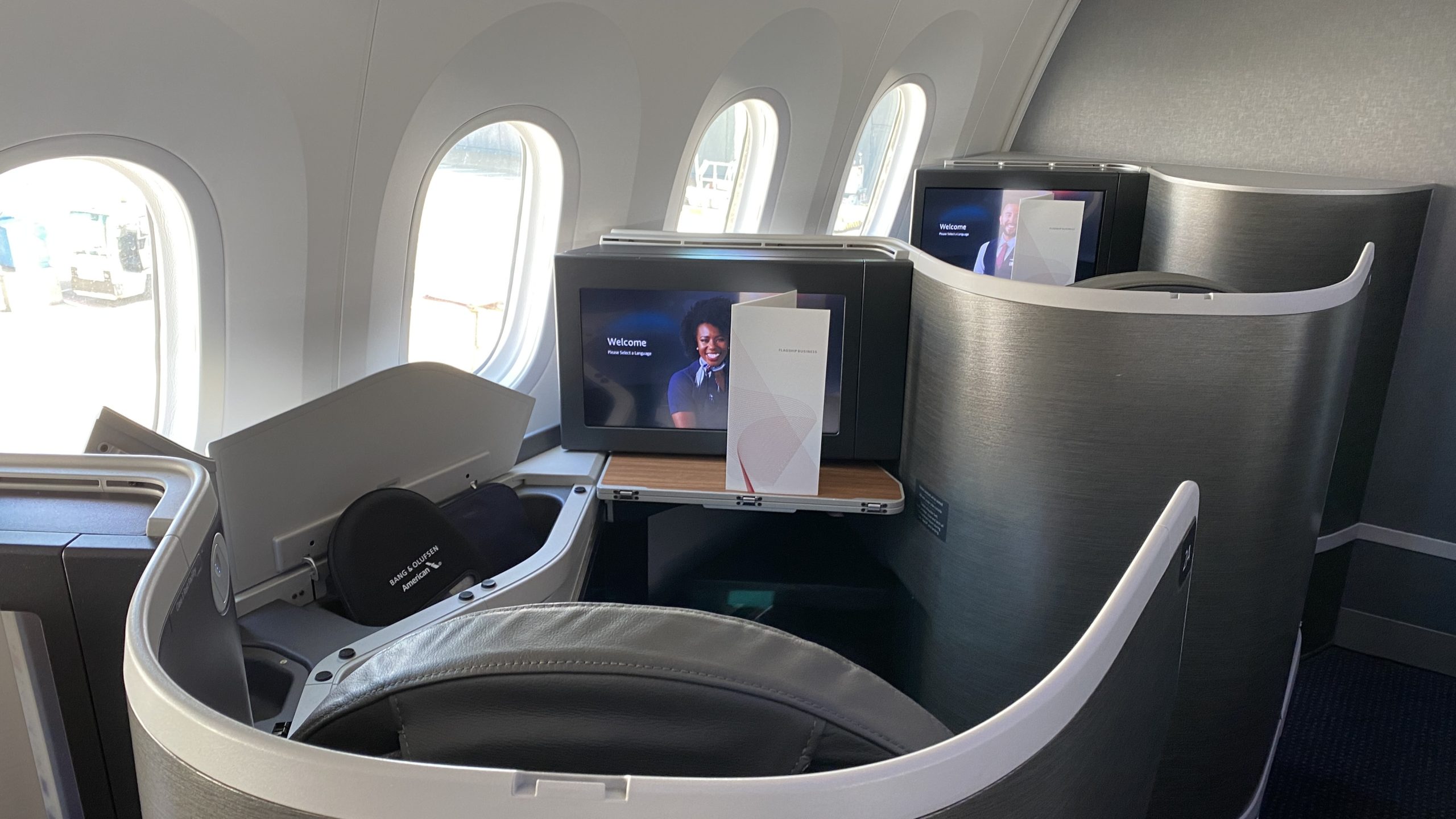