Back in April, we learned an all new Virgin Atlantic Upper Class would be put into operation aboard the A350-1000s Virgin had on order.  The announcement came shortly after BA debuted their new club suites, fit with doors, and while most people agreed the new upper class was a massive improvement over the existing product, they didn’t set a new industry standard.

As luck would have it, I was able to snag a last minute ticket with a quick transfer from Chase and Amex and give the new Virgin Upper Class a go for 47.5k miles and $600+ in taxes and fees.

First off…paying over $600 in taxes and fees nearly killed me, especially for a 6 hour flight, but with so few reviews out there and even fewer YouTube reviews, it was well worth it. In all honesty, if I were to make this routing again, I’d choose the earliest flight in the morning and fly Premium Economy. 6 hours literally flies by. In fact, it’s so short that I didn’t even sleep. Hello, England!

Virgin Atlantic Upper Class was my first ever premium product, and since I make the journey to London a few times a year to visit my finacee’s family, I figured I’d ended up reviewing the gorgeous new product sooner than later. Flash forward a couple months, and the opportunity presented itself with a cool routing via NYC, and a stop at the new TWA hotel. I was absolutely thrilled to not only hop on my first A350-1000, but see the new upper class within a month of its debut.

We had quite a bit of flexibility on our booking since we knew we wanted to fly to England, but only had fixed return dates after booking an amazing roundtrip business class fare out of Paris ( they started around $1300). Since we preferred to stay in the range of 10-14 days, we had quite a bit of wiggle room.

I started looking at potential options, and at one point considering routing through SFO to grab a better video of United’s 77W to Frankfurt, but alas, the only option was too early for our preference. Then…I started to think, what if we flew through NYC, checked out the new TWA hotel, AND tried out Virgin’s new Upper Class.

As luck would have it, space opened up roughly 5 days prior to departure on both the 7 and 830pm flights. Here’s a look at the seating chart. I wasn’t sure how loud the new lounge would be and decided to place us in the middle of the cabin in seats 7D, and 7G. Plus…7 is our lucky number so that was a fun one to land. How we earned the miles to book this

The two programs that I push nearly all of my expenses on are Chase and Amex, and it’s their points which I transferred for this redemption. I take every possible opportunity to earn multiple points and carry 5 cards that earn Chase Ultimate Rewards, and another 6 Amex cards that earn Membership Rewards. In fact, I just picked up my 6th Amex, the new Amex Green card, and have an updated list of cards I carry, plus ones that I recommend. You can read that here. We make money when you use our links for credit cards, so if you want to help us out, we thank you in advance.

I also earn a ton of points via referral, over 500k a year.

While the Virgin Atlantic Clubhouse London is an incredible lounge and their flagship, the New York is quite similar, but on a much, much smaller scale. You’ll find a stylishly appointed lounge with sit down dining service and a spa with 3 complimentary services. There are also other novelties like a pool table, bar, shower, a variety of seating options to enjoy. We departed out of JFK’s terminal 4 at gate 65. Some people will probably hate me for saying this, and it’s not anti-child, but the abuse of pre-boarding can be ridiculous. Obviously those with disabilities and very small children need some extra time, and they should pre-board, but I would say at least 25 to 30 families who took any and everyone they could claim as a dependent on their taxes, as reason to pre-board. I’m sorry, but if your child has a heavier beard than I do, or isn’t jealous that I’m carrying a cuter stuffed animal than them, they are obviously not kids, and you can board in the group on your boarding pass.

We boarded through the 2nd door in between Upper Class and Premium Economy and straight into the new lounge hang out. Kay, the flight service manager, greeted us warmly and pointed us in the direction of our seat. She was incredible from start to finish, and even took Miles to the flight deck for a picture. Very cool. The color scheme and vibe is effortlessly cool, and truly makes you feel as if you’ve arrived. The new Upper Class is configured 1-2-1 in a combo of Herringbone middle seats, and Reverse Herringbone window seats. All come with aisle access. 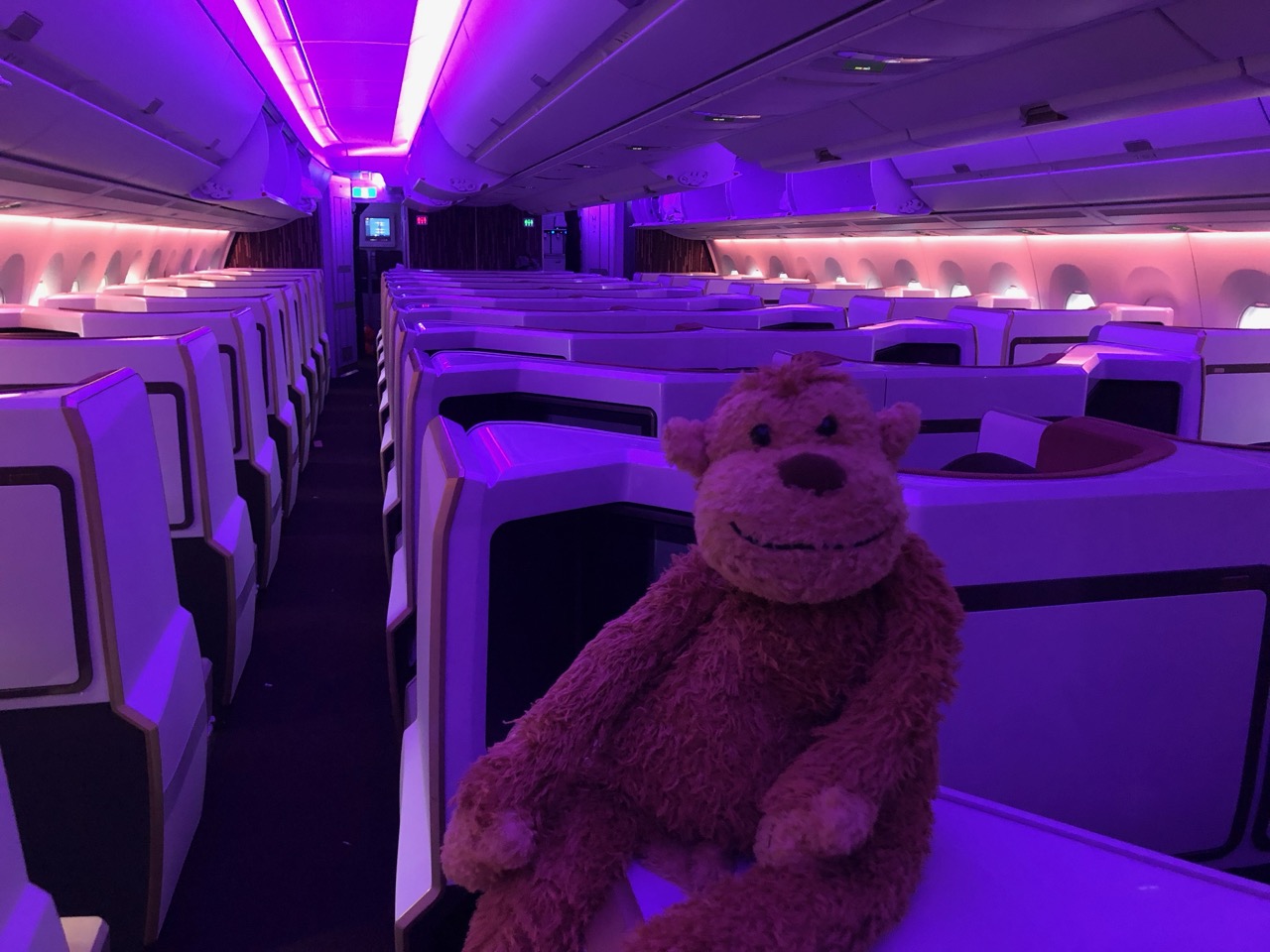 As I’d mentioned before we selected middle seats 7D and 7G. Since the new middle configuration is herringbone, it actually favors those who want to be closer to one another, but the lack of a full divider could make it awkward if you don’t.

Notice in the two pictures below that difference in configuration. The window seats put your head to the aisle and feet to the window, which I think creates the most privacy. However, the middle seats flip that around and place your head to the inside and feet to the window thus putting passengers nearer each other compared to traditional Cirrus seats you’d find on Cathay, American, EVA, Air France. Those links all lead to our reviews.

Here’s a look at 7G. For a herringbone seat, it’s quite private and fliers will enjoy ample space, but here’s the thing… I’m quite befuddled to the choices Virgin made specific to the seat. The bones are great, but Virgin chose to essentially provide no means of private and secure storage. Yes, you get an overhead, but the area that usually houses a little cabinet was instead made into shelves. You can imagine that the items placed here easily fall out during take off and landing, and are you really going to leave your wallet in plain site for the flight? This is the only provided space for storage aside from overhead. Massive fail in my opinion. Compare that to Cathay Pacific…which chose a Zodiac Cirrus, but fit it with a cabinet that closes, under ottoman space for a backpack, a lower storage unit, and the armrest ( with water bottle ) you’ll find a hidden cubby which is accessible in bed room ( when the armrest comes up.

The color scheme is gorgeous, but there were more issues. The seating controls look really cool, but were very finicky, as was the IFE. In fact, I was roughly 20 minutes into a film when it went black, came back on, and the film had been deleted. I wasn’t the only one that faced IFE issues, the man in front of me complained about issues as well. My first set of headphones didn’t work either.

There is no remote control. It’s touchscreen or link it via bluetooth to your phone. I didn’t even try to link my phone.

There are two different power ports. USB and multi-national

Sleep Suits and amenity kits were provided. Virgin has a new sleep suit, pajamas, which were very light and quite nice. The amenity kit has all the usuals, but is “sustainable” and made of, and filled with, items that are biodegradeable. If you’re used to flying Virgin, you’ll know that the old beds needed to be converted while you were out of them. The back would fold down, a pad was afixed, and you couldn’t slide from seat to bed mode in one swift move. These new seats have fixed that problem, and you can be in it from seat to bed and every position in between.

A thin mattress pad, sheet, comforter and pillow are provided. The food, of which I had a lot, was delicious. The chocolate cake, in particular, was quite good. I didn’t sleep at all, so I had a fruit, coffee, and OJ breakfast.

I had a great time on Virgin’s New Upper Class, and I think they definitely compete on a different level. The service is amazing, you get pajamas, the food is tasty, but the seat…is a bit of a let down. The most important aspect of business class is the seat so you can sleep well and head to work. I don’t know about you, but I don’t rest easy thinking that my stuff my be easily gotten into. Yes, this is a concern in business, first, wherever you sit.

I’d hope that as Virgin looks into retrofitting their existing aircraft, that they either choose a different variant of Cirrus, or tailor the existing product to provide more in-seat storage.

The A350-1000 is an incredible aircraft, and if you watched the review, you can still hear some ambient engine noise, but compared to most other planes in the sky…it’s little to nothing. Man, those babies are incredible machines.