Last week we wrote about a strategy that could help you secure an American Airlines Business Class upgrade on it’s transcon A321T if you aren’t a ‘keeper of the gate’: Executive Platinum or Concierge Key. These guys just push us lower elites right out of the way, butttttt with a little savviness we can fight back.

Just like I’d mentioned in my earlier post, I had auto requested with 500 mile upgrades and didn’t really expect much. So I was now looking to see if maybe I could upgrade with 15k + $75.

We’d been frenetically checking the inventory on expertflyer, not that I don’t trust their email alerts, but Miles is OCD and he just likes to check and check and check. Around 1am, the morning of my flight we logged and saw that there was one seat avail ‘c’ so we immediately jumped on the phone and spoke to the rep.

Without a hitch she said she would book the ticket and BOOM we were in confirmed business!!!!! BYAH BYAH BYAH

American Airlines Business Classssssss A321T TRANSCON!!!!! WE DID IT

I didn’t have a choice of seats – this was the only aisle available!  But here’s the seatguru info. Make sure you get all the angles!

This ended up being the best possible time to upgrade because our flight was late pushing back from the gate and then once we got to the runway we were notified that the cross wind was so severe that they were holding flights until the wind died down. We were 20th in line!

Good thing I had plenty of room to stretch out! After waiting an hour to take off

we were told that there was a medical emergency on the plane and we were taxiing back to the gate. I was actually quite happy that this happened while we were in queue and not in the air: what a tragedy if something happened! Anyways, we made it, medics came on and assisted. After another 90 mins at the gate we were told that the medical emergency had been rectified and the affected party would come back on after a clean up crew. Phew – they were ok! Plus we were…BALLLLLLLING out in business! We had movies to enjoy! THROW DEM BOSE! Once everyone was safe and sound we headed to the runway. At this point we were over 3 hours delayed.

As we took off the plane rocked, swayed, pop, locked and practically twerked its way up to 35k

let’s say that the cross winds hadn’t really died down too much! It was Rocky!

But we were in BUSINESS! So we just laid the seat back, watched a movie, and sipped CHAMPERS

Once we were up and attem meal service commenced. I have to say – American is taking their service and their food to the next level. Gone are the days of rubber chicken and sandwiches that resemble dirty socks – American now serves food! I chose the Shrimp and the ICE CREAM!!!!

The smoked salmon cheesecake was incredible – I was sort of shocked that it was as good as it was. I snarfed it up!

<BIG EXHALE> ICE CREAM at 7 Miles high! I still Marvel at it. So good!

After getting our bellies full – we were OUT! 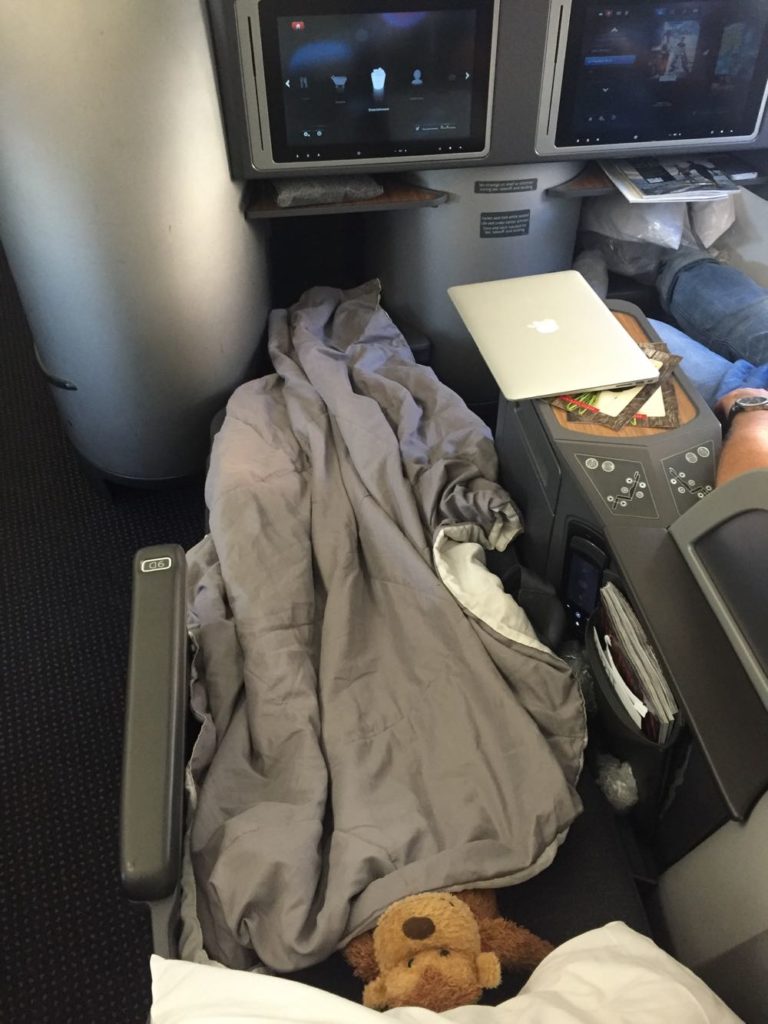 We landed after being on board for 9 hours and boy was I happy with my upgrade!

A few days after the flight I even received this email, which I wrote about, saying they were giving me some extra points for the delay. Kudos American, American

I basically took an international flight given the actual time on board – 9 hours. Had we been in coach…I would have had a very grumpy monkey on my hands and my next week’s banana bill would have been steep! So I probably saved $75 just on my banana bill.

Great product. The only thing that I could put forth as a criticism is the lack of privacy. The guy next to me fell asleep early in the flight and I felt bad about turning my light on to eat, but I did anyways – he didn’t wake up. I can see why people would opt for  First class over business purely for those privacy reasons. One of the hosts on ESPN was in First and I’m sure he would have been caught up in sports conversations during the delay had he been in business. This stands as a difference between business and first on the 777-300ER. I flew that product a couple weeks ago and I’m not really sure that First Class is that necessary, especially when flying in the business class mini cabin – which I did on one leg. The privacy of the mini cabin is very similar to that of first on the 777-300ER. On this plane, there is a marked difference between business and first.