Why yes, we will fly halfway around the world for the weekend to attend a quintessential English wedding, toast champagne, laugh, cry, and not sleep.

You don’t have to ask us twice – we love this stuff! What made it even more fun? Upgrading into British Airways First Class on their flagship A380.  We took advantage of an upgrade opportunity at check-in and didn’t look back.  We kicked it in the Qantas First Lounge, boarded first, toasted fancy champagne, and had our PJs on before the flight took off. What made it even better? I was crediting the flight to Alaska and it came through as “A” and earned me over 13k+ EQM and 31k RDM.  Byah! Without further adieu – let’s slide into BA First Class =)

I used priority check-in( there are two: Biz/Sapphire and First/Emerald). They were both empty and I was at the desk immediately. I had been tracking the flight for weeks. The load of the first class cabin had dropped to one seat the night prior to departure, but on the way to the airport two additional seats opened up. I phoned BA to see if I could upgrade from Club World to First using Avios but the avail wasn’t there. I asked again at check-in ( knowing that they can’t really execute that then, but if space was avail I could step away and call in) and they said no space was avail with Avios, but a paid upgrade was. I pulled the trigger.

You can read my experience upgrading from Business to First here.

I had never been to the Qantas First Class lounge at Lax until this flight and was excited to check it out. Upgrading to First guarantees you access, but I would have reviewed it anyways given my Emerald status, and it’s well worth a visit. The food is excellent – restaurant quality. You can read the whole review here. If you’ve ever flown an A380 you know that they basically move a small town. I grew up in a town of 2000 people. This plane carries a ¼ of that. What does that mean? It takes a long time and you want to try and board first. Luckily with First Class you are front and center and hopping on that plane before almost anyone else.

I loved the mood of the First Class cabin. It’s sexy, understated, and the blue hue handsomely compliments the pod design. You’ll be greeted immediately upon entering and I was offered Champagne. The seats in the first row are by far the best. I was in a middle bulkhead seat and immediately after take-off I raised the privacy screen. If you’re traveling together – this is pretty dope as you want to experience First together.  However, as a single, I felt as though I had plenty of privacy and it was VASTLY better than their business class.

Storage is very good, but there isn’t really any under ottoman storage.

The ottoman can be placed into two different positions: one as a seat for a visiting passenger or where your feet go in bed mode – the other as a footstool in a lowered position.  This means the mechanism that moves the ottoman takes space and you can’t stow your bags under it during take-off/landing. BA makes up for this by providing each seat with a closet. It was large enough to hold the clothes I wore onto the plane, my Tumi Alpha Bravo backpack, shoes, and amenity kit. The only thing I used the in-seat storage compartment for was Miles ,my GoPro, and phone.

The food was the best I’ve had on BA. I ended up having the Tart, Shrimp, and Ice Cream. All of them were pretty good, but not when compared to the catering on Singapore, Lufthansa, JaL, or Cathay.  Then again…I wasn’t expecting it to, and was very pleasantly surprised.

I found the service to be very good, but I didn’t feel like they derived pleasure from serving like they do on Singapore, Cathay, or Lufthansa. It could also be that I was blowing the pod up with pics and Miles was attempting to swim in his Champagne glass – but hey! This is First Class, right?

Such a luxurious perk. Finish dinner, tend to your gums, and BAM! Your bed is made. I’ve read mixed reviews about BA’s bed, but I enjoyed it. I found the down comforter to be perfectly weighted, and being given two pillows is amazing. My favorite is still Lufthansa, but I give it high marks. I slept a SOLID 5.5 hours.

Is First Class that much better than Business Class ( Club World )

Uh. Yes. First Class is a truly a notch up. You get guaranteed aisle access, better food, service, and Pajamas. Not to mention a much better bed and if you like Scotch…your inner Ron Burgundy may make an appearance.

Would I pay to upgrade again?

Probably not $709. That’s a lot of money, but I wasn’t feeling well, had a very short turnaround, and knew I’d get several posts out of this one experience. Would I use Avios to upgrade? Hell to the Yes. This is one of the best ways to use Avios.

I had a great time in BA First, but would I fly it again? That’s a tough one. I’d 100% use Avios to upgrade. I chose to fly BA because of this blog and because I want to have as many competitive comparisons as possible. This means I don’t always pick the best cabin or airline for the segment. I wanted to check out BA’s A380 Club World again this year, and also see if I couldn’t swing myself into First at some point. And I have.  In all likelihood I’ll try and avoid British Airways premium cabins altogether going forward unless they are incredibly cheaper. 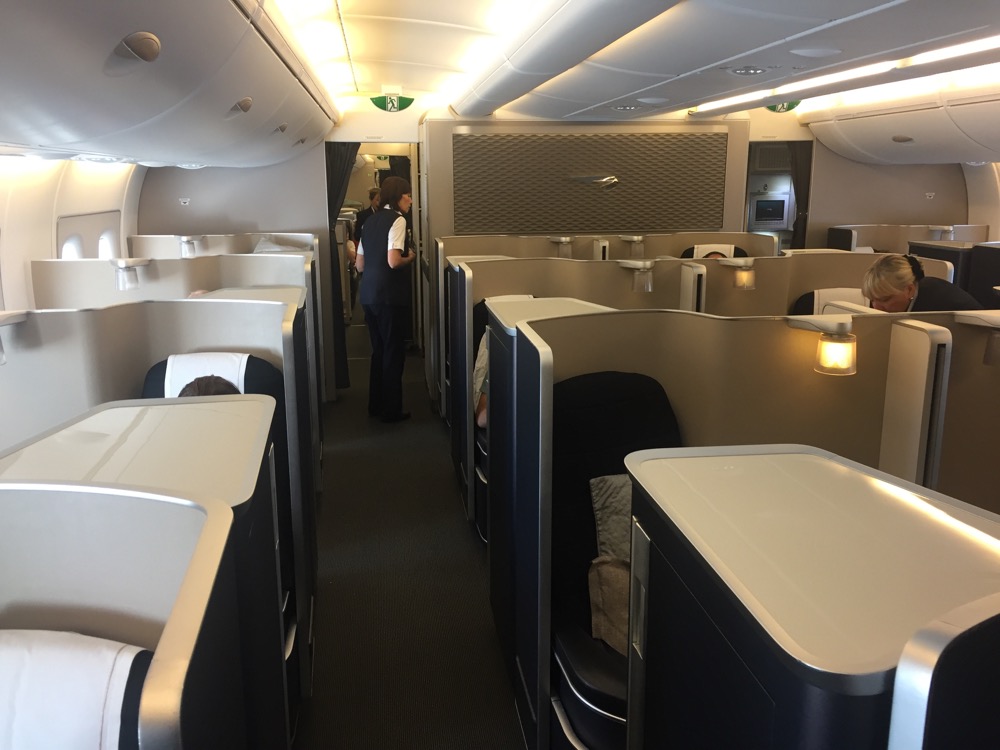 While I like a few of the BA First Class amenities ( Pajamas, Champagne, Scotch, pillows and comforter) I don’t think the hard product is much better than AA’s 77W in business class.   In fact, the mini cabin aboard AA’s 77W offers more privacy than does BA’s First.

What I’d recommend to those wanting to earn lots of Alaska Miles with the current promotion.

You want the flights to book on BA metal, but the best business class is on American. Try and find flights on BA’s website operated by AA metal.  This means they’ll have a BA flight number and BA ticket stock, so you’ll get credit as a BA flight, but you’ll earn as if it were BA. You’ll get the best of both worlds.

A Video review is coming.