Leading up to the club suite announcement in 2019 there had been a ton of speculation about what British Airways was going to do with their new business class.  British Airways had never fully overhauled their club world seat since its inception in March of 2000 when they set the aviation world aflutter with the first fully lie flat seat. Geeks like myself were on pins and needles whispering about every “leaked” image…and boy were they disappointing. A lot of BA Biz

I’ve flown Business Airways Business Class a ton. My soon to be wife is from England so we visit often and BA offers incredible deals originating in mainland Europe for their business class. Often times we’ve paid around $1500 r/t to start our flights in Dublin, Inverness, or Stockholm which is a screaming good deal for business class. We’ve even upgraded a few times to First Class with Avios.

To make it even more enticing, Alaska has offered unbelievably lucrative earn rates on British Airways flights for the past several years. On a few occasions I’ve earned close to 50k points roundtrip which is roughly the amount needed to fly one way business class back to Europe, or Asia ( Cathay Pacific ).

Needless to say, I’ve flown several iterations of Club World and chosen them, not because they offer the best product, although their service has always been impeccable, but rather because the price was right and I’ve earned heaps of points.

Let’s be honest… the original version wasn’t too much different from the Club World that is on most of BA’s aircraft 20 years later. It is woefully inferior to most any other international business class, save a few seating exceptions, but that has now changed with Club Suites. You may wonder why I was able to earn miles on a ticket booked with points. My original flight was rebooked, often times when this happens, the new flight is recoded as a revenue fare instead of an award ticket. This was the case this time around. Lucky boy. Alaska Airlines is my favorite airline loyalty program for several reasons and I had quite a stockpile of points in my account from pre-covid. I’d originally booked a flight on AA’s 777-200 which ironically features the same seat without a door. It’s one of my favorite business class seats because it provides ample storage, privacy, and state of the art entertainment screen. It’s from B/E Aerospace, ie Collins, Aerospace, it can be found on several airlines around the world: American, China Airlines, and this Club Suite from BA. As I’d mentioned before, we were originally supposed to route through Charlotte from Indianapolis; however, as we were arriving at the airport we learned our flight from Indy to Charlotte was running late, so late that we wouldn’t make our CLT to LHR flight. Lucky for us, we had an incredible AA agent who quickly rebooked us via Chicago and onto this BA A350-1000. I couldn’t have been happier since we ended up not only flying BA’s new Club Suites, but also on a revenue fare that would earn us both elite and redeemable miles.

This is the clearest example of the tax and fee differential between booking AA and BA. Our rebooking saved us over $1400 in fees. 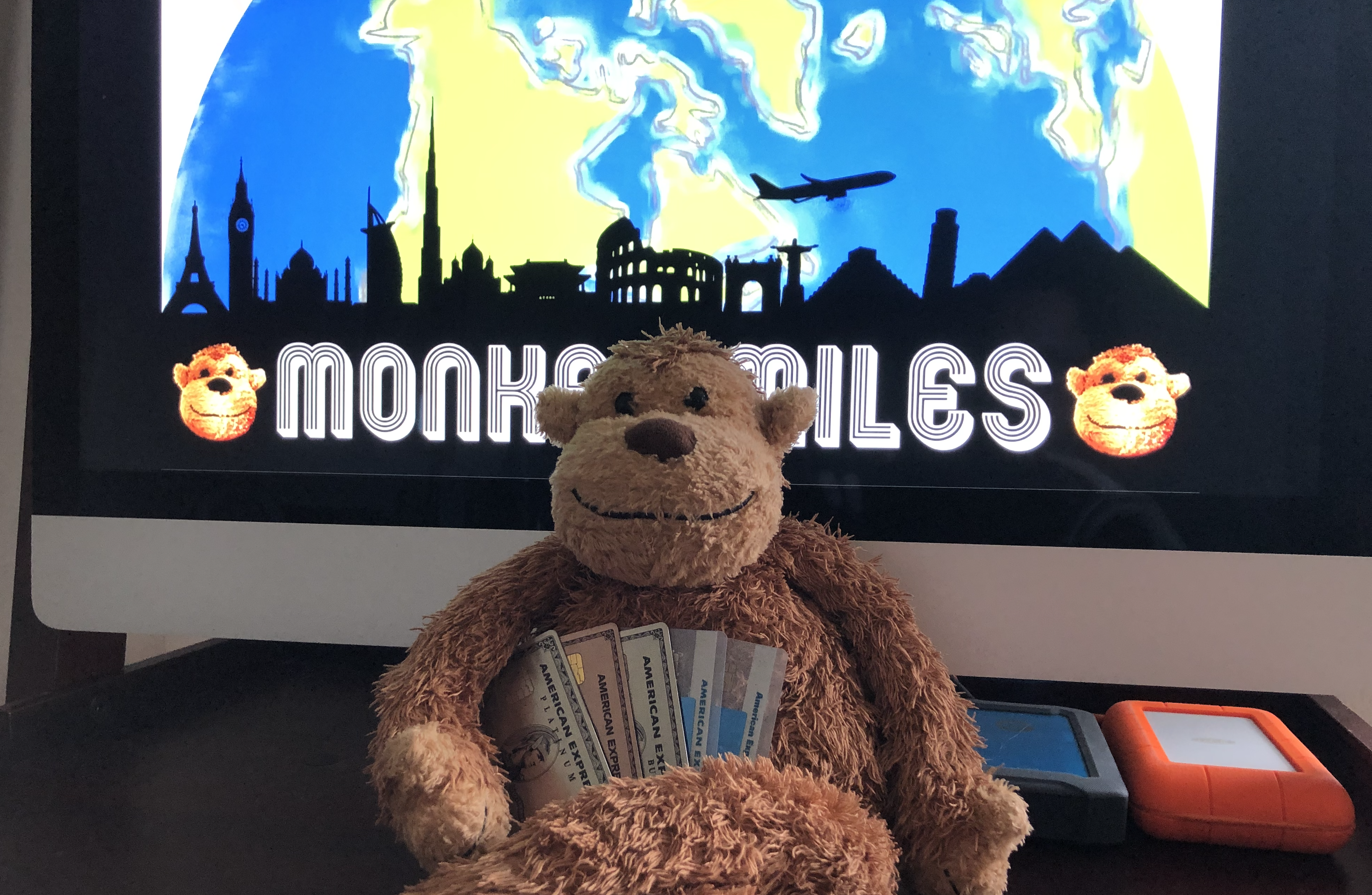 Since we were rebooked at the counter in Indianapolis we didn’t have seat assignments, and we also needed to speak to a rep from BA prior to boarding. This is important for later.

This was a mistake. Upon check-in at ORD with BA we were told that those were no longer available which consequently meant our passenger locator forms were invalid.

Ultimately we chose seats 9E and 9F and finished the forms while queueing for security. This was the 3rd set of forms we filled out. Once for our original AA flight. 2nd with the wrong BA seat numbers. 3rd this time.

A couple things to remember

British Airways Club Suites on the A350-1000 is broken into two cabins. The forward cabin is 11 rows configured in a reverse herringbone pattern ( head to the aisle, feet angled inward ) with a 1-2-1 formation.

The mini cabin is the same setup but with just 4 rows. Generally, I think this configuration, and the Apex suites found on Japan Airlines, Korean Airlines, and Oman Air are the best setup for privacy, storage, and room.

On planes that have “mini cabins” I prefer to sit in those; however, because of Covid, the entire mini-cabin was blocked and couldn’t be chosen. You can see it’s much smaller, but you will be closer to the Premium Economy cabin and lavatories/galley. 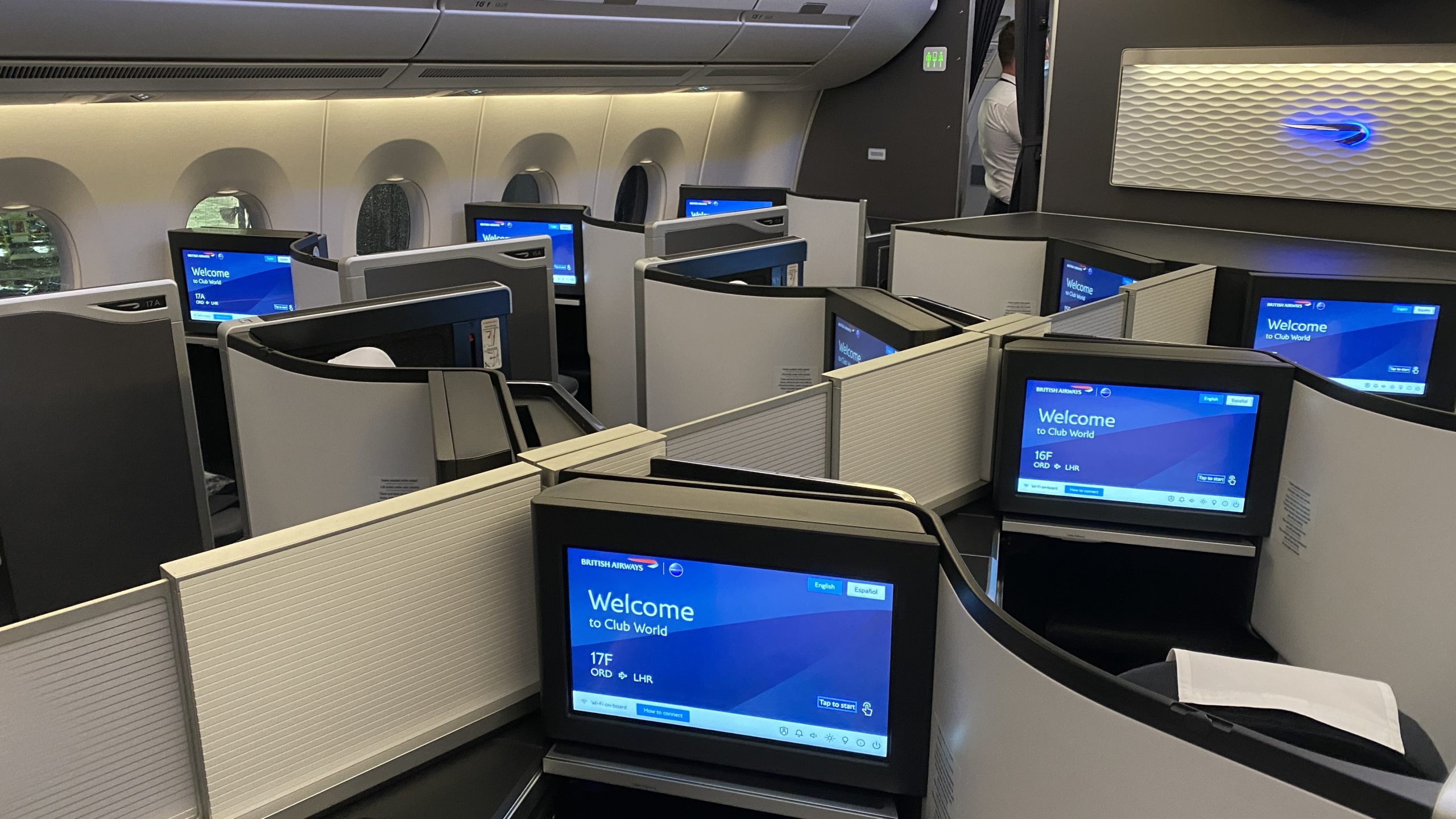 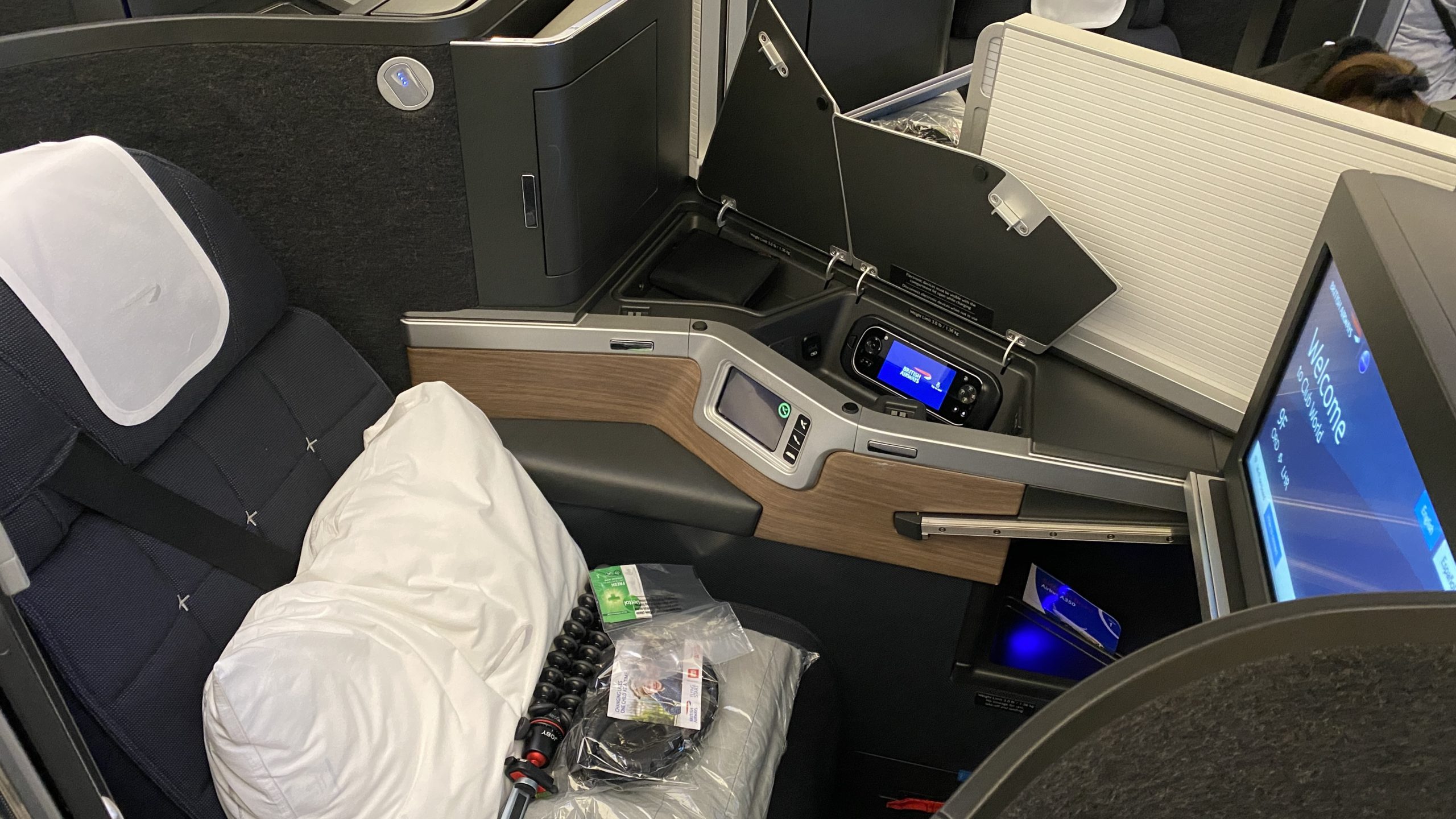 If I were to be traveling alone…I’d most certainly choose a window seat. The BA lounge was closed for Covid, but this is what it ordinarily looks like – you can also board via the lounge which is pretty cool too

There was a minor glitch in boarding when the boarding pass scanners went down. It was shortlived and we hopped on the plane in group two and boarded between the two business class cabins. Surprisingly, the cabin had filled up quite quickly and I couldn’t snag my clean cabin photos that I like to get. It’s a stunning cabin nonetheless. However, I did have my fiancee snap this photo…yes, I’m the only one looking at camera 🙂 It’s a stunning cabin and seat. The seat is nearly indistinguishable from AA’s 772 and China Airlines 773 business class products that feature the same exact seat, but without a door, and different finishes. These are the three side by side. The most notable difference is BA’s iteration’s ability to slide the tray table under the IFE.

One of the biggest perks of this seat is the storage. You can see the two storage compartments popped open here which offer power outlets, an IFE control, etc.

There is a storage compartment that offers a vanity as well, but it’s noticeably smaller than AA’s or China Airlines since part of the cavity is filled with the back of the IFE. Additionally, there is a small compartment that is perfect for a wallet or bottle of water.

It’s 79inches long and comes with White Company bedding: a pillow and comforter. It was perfectly comfortable, although a bit narrower than I remember it being, but I managed to sleep a solid 4.5 hours. I’ll be straight up with you. It’s a novelty. The seats aren’t high enough to fully obstruct someone looking in on your seat.  Truly what they do obstruct is a nibby neighbor who wants to peer into your seat from across the aisle. They won’t be able to do that with the door closed. Otherwise…it’s really cool, but not that practical.

We were delayed 2.5 hours after boarding.  On one hand, this wasn’t a necessarily a bad thing since we’d be a little more tired and could sleep a bit easier, but… They weren’t doing any pre-boarding drinks apparently because of Covid protocols. We did get water, but during normal times we would have been sipping champagne, a soda, perhaps even some nuts would have been served. 2.5 hours is a long time to sit without anything snack wise.

Once we were airborne, food was promptly delivered, although all at once instead of the typical course by course delivery you’d normally receive.

In so many words, it was absolutely delicious. After sleeping we were served breakfast. I hardly ever eat breakfast, but I love Bircher Muesli. Aside from the delay, I couldn’t have asked for a better flight. I look forward to flying Club Suites again, and per usual, the BA crew was exceptional. As an aside, there was a passenger a couple of rows behind us that was quite rude in her complaints. I get being frustrated with delays, but none of them had anything to do with the cabin crew or their performance. Even the absence of pre-departure drinks has nothing to do with them…it’s either a BS policy that BA is implementing to cut costs and use Covid as an excuse, or something being imposed by airline regulators. Either way…the crew was exceptional to my fiancee and I.

Clearly I’d been doing a lot of snapshots and videos and I was given the distinct pleasure of visiting the cockpit after the flight. Very, very cool.