This is part of the London Weekend Wedding Trip. I needed to get to London for a wedding this weekend and finagled a routing through San Fran. For 57,500 AA miles and roughly $85 I booked LAX-SFO-DUS-LHR in business class. When I initially booked the itinerary the only avail had me traveling all in one day with a layover in San Fran over 12 hours. I went ahead and booked it and waited for alternate flight to open up. One did, the night before, and I snagged it. AA allows you the change tickets without cost ( aside from taxes and fees) if you abide by their routing rules. Since I would only be staying in San Fran for 20 hours before continuing on to Dusseldorf I was ok…you must be under 24 hours to be on the same priced ticket. Yes, it was a long routing, but it ticked off a couple of boxes: 1) I really wanted to experience Air Berlin Business Class and 2) I’d get to review the newly renovated Hyatt Regency San Francisco Airport. 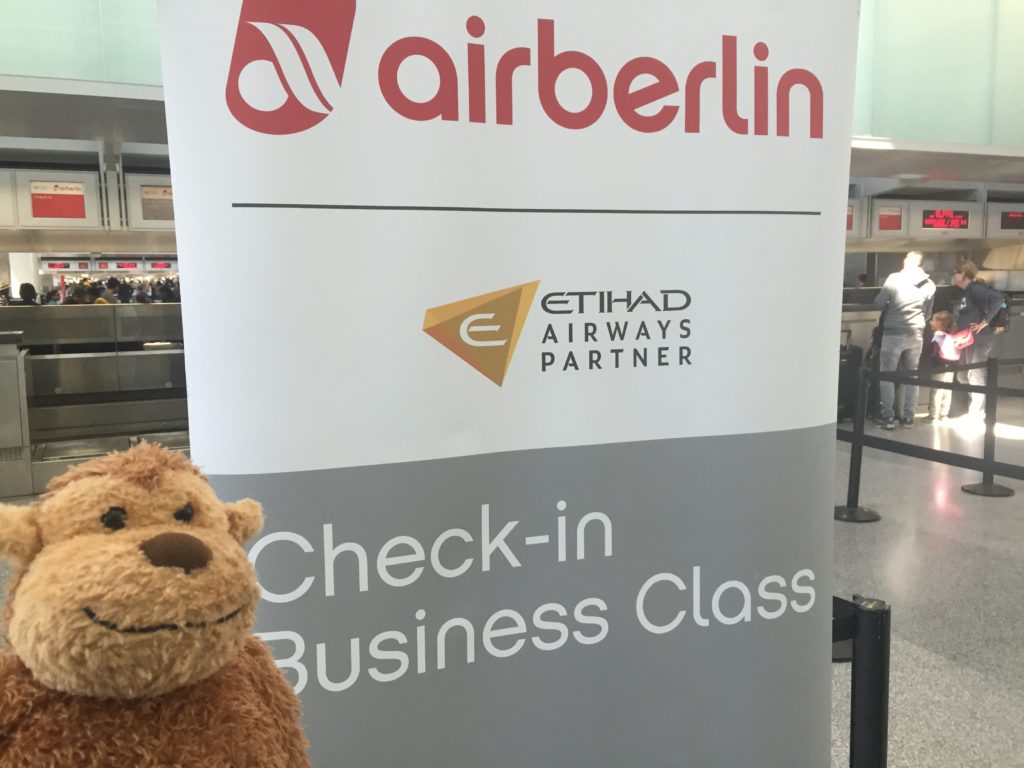 No one was there. Literally only the desk agents. Air Berlin launched this routing in Mid May so it’s pretty new. I wasn’t checking any bags so I think the whole process took about 3 minutes. Air Berlin flies out of International Terminal A. There are actually two sides to the terminal so make sure you go to the right side. I was also informed that they had a relationship established with the KLM/Air France lounge. That lounge is actually a Priority Pass lounge and I had seen that there were 3 One World lounges as well: Cathay Pacific, Japan Airlines, and British Airways. I headed straight to Japan Air. Rejected. What?! Apparently they aren’t accommodating Air Berlin passengers. So then I went to Cathay…had I not been One World Sapphire they would have rejected me too! WHAT?! So I swung by KLM/AirFrance…SO Packed I left and had to try my luck at BA…rejected. I had so much time on my hands I actually trekked over the Terminal 3 and tried out the Centurion Lounge. Of all of them…I prefer Cathay. I had really hoped to get into Japan Airlines because I was craving sushi, but what can you do…the door guys said I wasn’t on the list. The last time I boarded through such a palava was in Bangkok where I thought I’d lose an eye trying to get in line. EVERYONE just bumrushed the boarding line when they called priority. Now I may not be German, but even I knew all these frauleins couldn’t possibly be priority. Excuse me, Excuse me, Excuse Meeeeyyyyyyyy. Finallly got through. On to the plane… I was kind of expecting it to resemble Etihad’s Pearl business class, and it kind of does ,except it feels waaaaaaay more cramped. I’d picked 4k because of the privacy, but after seeing the cabin I had to say that the first row window seats are by far the best. They not only have the privacy but also far more room. I’d read where the biggest complaint is space and I can absolutely see why. Miles and I could BARELY move around with our bags down the aisle. And getting in and out of the seat was a delicate dance of balance and ingenuity. Continuing with the cramped theme. It’s cramped. Just getting in and out it’s cramped. 4k has a little entry way to get to the seat. I picked this seat because it would be private, but the entry way to the seat is so narrow I had to turn sideways to get in and out. Look, I’m still going to lie flat and have a great time, but I’m just explaining this for comparison’s sake. It was the first time I had to contort myself all over the place to snap pics. Miles is so selfish he just laid there while I moaned and groaned 😉 I think I’ve flown AA’s 777-300ER and lost touch with the reality of other business class. It has so much space not only in the seat, but in the aisles, and it has tons of storage space. There was none of that here. I couldn’t find anywhere to put my wallet, tuck my phone away, or stow my backpack at the seat. I will point out they had a nice shoe cubby under the ‘ottoman.’ That served to be quite useful.  I had a whole overhead bin to myself, but that was only cause a man and his wife were sharing one across the aisle. The 3 windows that are exclusive to this seat are incredible and make it feel more spacious than it is. The width of the seat was such that it made it difficult to turn when lying flat. Even when upright I’d guess it to be narrower than a domestic first class seat. I’m 6’ and 170lbs… I don’t really see how bigger people could do much in these seats. In fact, my feet, size 12, wouldn’t even fit upright heel to toe. When the seat was in bed mode, I couldn’t find a position that allowed me to actually lay out, I always had to be twisted or curled. Ultimately I still managed to sleep for a solid 5 or 6 hours so I can’t complain too much, but if you’re much bigger than I am… you’re gonna have some issues. I’m sure some of you are out there thinking I’m just moaning and groaning. I’m not complaining, just pointing out comparative features. It’s still lie-flat and I got a great deal, but given the option – I’d choose AA no questions asked. Amenity kit was pretty standard plus some slippers which I found to be a nice touch. Nothing worse than walking to the bathroom in socks and then step in someone’s pee. I can’t say a single bad thing about the crew. They were super nice, attentive, and very friendly. Pre-flight champagne was served and soon after we got to cruising altitude we started meal service. Pre-meal drinks were offered and the meal was far better than I expected.

I’d have to say the best part of it were the scallops. The pasta was mediocre and the dessert was just ok. I was absolutely starving when I got on the plane because the lounges didn’t really have proper meals out and I tried to get into 5 of them. Yes, I spent almost 4 hours at the airport going from lounge to lounge to lounge to lounge to lounge to finally end up hungry and tired. The complete opposite of what a lounge is designed to achieve. Miles is a die hard blogger and despite my many attempts to stop…he pushed on.

Scallops on a plane? I know…I was a bit nervous too. They ended up being very good! Bravo Air Berlin. It was an easy flight that got me to where I needed to be rested and fed. I’m glad I did it and it’s certainly a very viable option for getting across the pond on the cheap. I’ll be flying BA Club World in about 2 months so I’m anxious to see how that compares to Air Berlin as AA has this beat by a Mile. BTW: I don’t have overly HUGE feet…but as you can see – even my size 12 feet are way too big.