It’s been a big year for Capital One. Not only did they improve their award program and make 15 out of their 17 transfer partners 1:1, they dropped a game changing Capital One Venture X, and opened a world class lounge at DFW. I’m excited to see what Capital One has in stow for 2022!

As luck would have it, I recently flew through Dallas en route to Vancouver and managed to squeeze in a quick trip to the Capital One Lounge in Terminal D. I’d heard some really great things about the new Capital One Lounge at DFW, but it didn’t disappoint. The most impressive element was the food…which is often the least appealing part of most airport lounges in the States. Let’s get into it!

I was able to access this lounge fee free with my Capital One Venture X – what I consider to be the best premium card for most people: 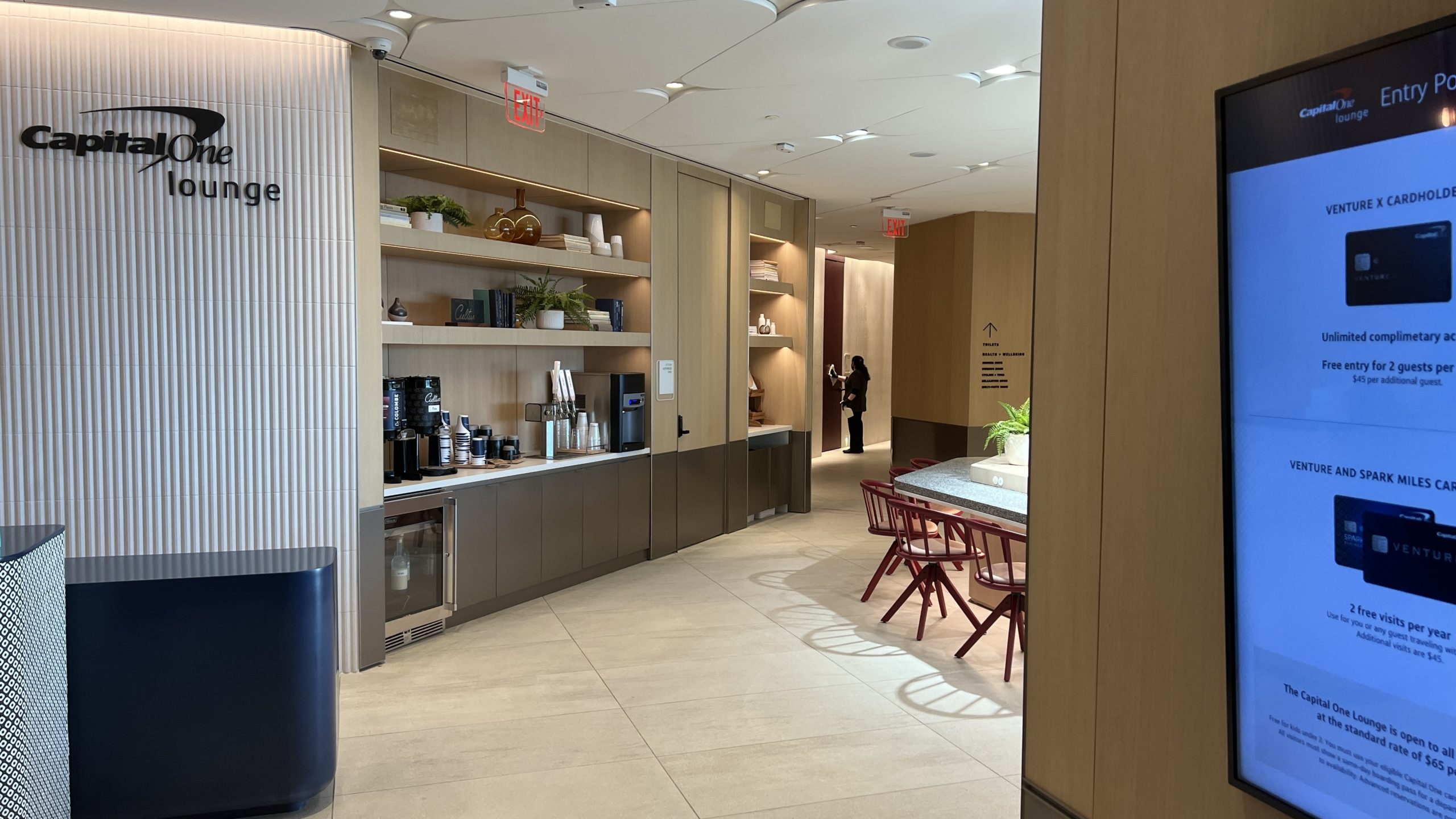 How to get in?

If you hold a Capital One credit card you can access the Capital One lounges but access varies depending on the card that you have:

As you can see, it’s in Terminal D, near gate 22, on level 5. It’s literally next door to the AA lounge. It’s modern, well laid out, super bright, and puts food first. Literally, if you were in a mega rush, you could swiftly check in, grab pre-packaged food to go, and grab cold brew coffee/lattes on tap. You could be in and out in 5 minutes with a tasty meal. I’ve never seen tap lattes prior to this, have you? Also…I visited around 4pm and it was dead. Very few people and I’d guess that is going to quickly change once word gets out how great the Venture X is and top notch their lounges are. I kid you not, it’s delicious. I had root vegetables alongside chicken pot pie and took a chicken salad sandwhich to go. All weren’t just good for crappy airport food, they were legitimately good regardless of location. In fact, if my local grocery store sold the root veggies with mushrooms in their deli, I’d buy it. There were 3 or 4 different sections of food as well, and if I had had more time I’d have grabbed some sweets.

I took a chicken salad sandwich with me and it was soooooo much better than the first class meal I was served on AA. Pretty cool that they have to-go bags with cutlery as well to aid you in taking food with you.

The bar and work areas

I didn’t have time to taste any of the cocktails but if they are anything like the rest of the lounge, I’d expect them to be dangerously good. The area offers high ceilings, tons of light, and plenty of dining/work stations. While most lounges offer showers and rest areas, the Capital One Lounge DFW went a bit further and offers Peloton bikes and a dedicated nursing station. I’d imagine the latter is welcomed, but I’d be keen to know how many people have ever used the Peloton bikes. Super cool idea, and clearly the marketing is working since I’m writing about it J Capital One killed the lounge game. The only question I have is…will they be able to sustain this? It’s really too good to be true. They’ve clearly invested a lot of money in the build out of a beautiful space and the quality of food is like nothing I’ve seen. It draws comparisons to the Qantas First Lounge at LAX, Flagship First AA lounges, and perhaps the Polaris lounge at EWR with a dining room.  I haven’t had any other food that rivals it domestically. It’s really that good.

Bravo Capital One. Not only have you created a truly stellar award program and released what I think is a game changing premium card in the Venture X, but you set a new bar in airport lounges as well.

Next up…sometime in 2022 we will see DC and Denver get Capital One lounges.