Ahhhhh. The Queen of the Skies, flown by an airline whose motherland has its very own Queen.  Do I bow? Is there a dress code? No, silly, the Queen of the skies doesn’t require such frivolity. If you’ve got the cash…or points in this case, all are welcome. So kick back, put some rocks in your glass, and enjoy this single malt review of British Airways First Class 747-400 where we detail exactly what it’s like to fly in the nose! B-YAH! I took another #weekendwarrior trip with my buddy Dave in November to Asia. We flew Cathay First back from Hong Kong and during the flight I told Dave about my trip back to London in December for a couple of days. He was in. Originally, neither of us were on the 747 flight, and neither of us were in First Class. Space became avail, some magic was worked at check-in, and wham, bam, we were flying in the Queen’s nose. BA is offering upgrades from biz to first for $709 – this was offered on our flight which only had 6 seats occupied when I checked in, but flew a full cabin in the end. You can read how it all came to be here if you’re interested.

See those windows right under Miles’ ear…they were mine. Dave had the same windows on the opposite side. Notice anything special about them? They’re ahead of where the cockpit is…pretttttttty, pretttttty, dope if you ask me. The lounge is super small and uninspired, but there are two things worth noting about the lounge:

I’ve flown in the nose of 3 747s: Virgin, Lufthansa, and BA. Of the three, I’d say that this ranks 2nd in how close 1A and 1K are positioned. Depending on whether you’re alone or not, that’s either a good or a bad thing. Since we were flying together, we were keen on sitting near one another. It worked out well and we were able to dine together shortly after take off. 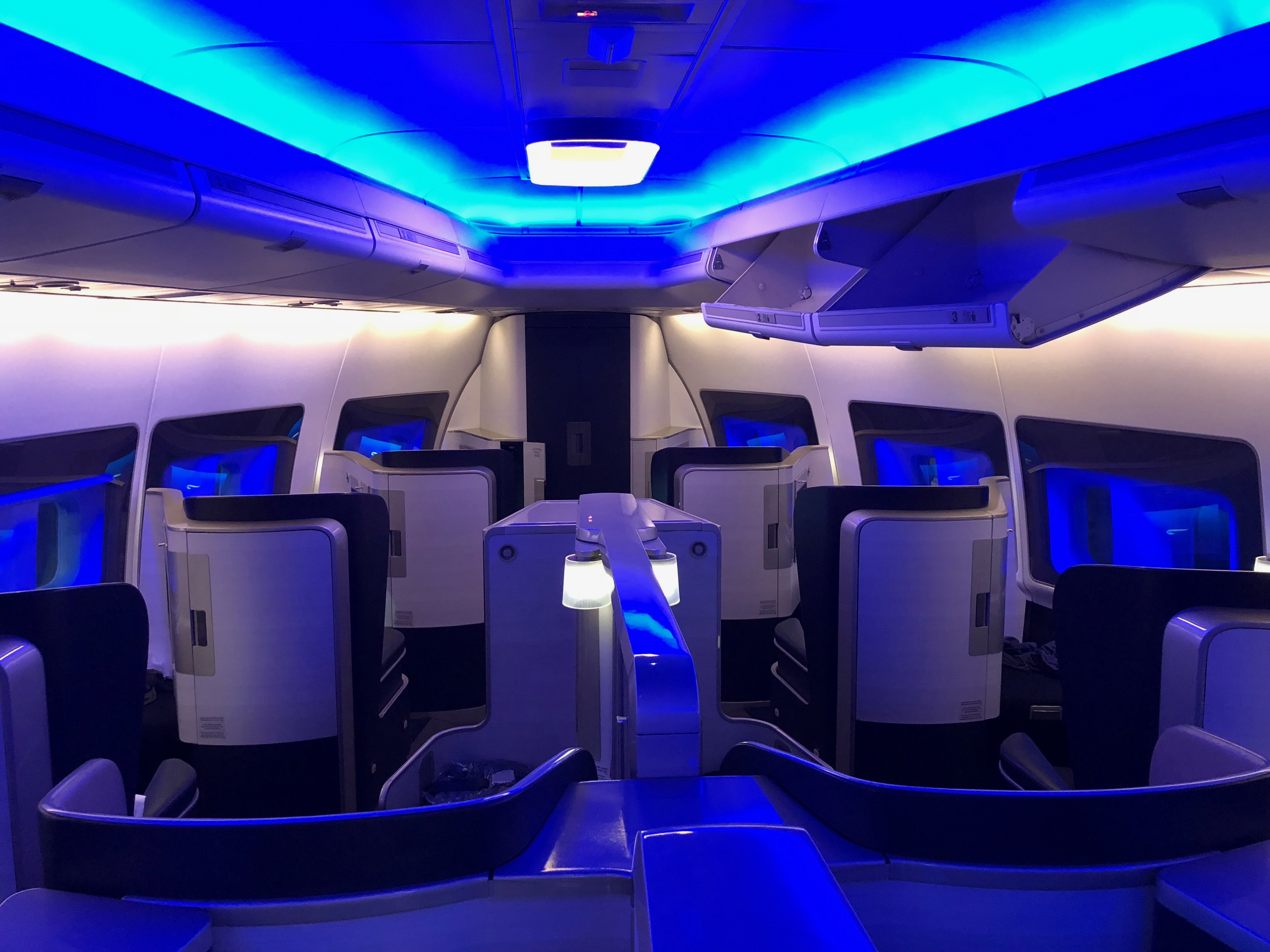 In between 1A and 1K there is a closet. There are a few sacrifices that choosing these seats entails. There is no overhead space, hence the closet, but you’ll more than likely end up sharing this closet with other passengers as they’ll hang their jackets, shirts, etc in it. The seat itself also has limited storage comparably.

Dave’s reaction was perfect: When he sat down he leaned over and said, this is much more like a nice business class than first class. Yep…that is certainly the case, and with this flight juxtaposed within 4 weeks of flying Cathay First it’s even more noticeable. With that said…it’s relatively private, lie flat, reverse herringbone, and is pretty comfortable. The biggest complaint I had was storage. As you can see in the pic above, Miles is sitting on what turns into the tray table. This isn’t a storage compartment. You can also see that the window is basically flush with the edge of the table. There isn’t a compartment below the seat to stow your amenity kit, glasses, etc. If you want…click over my BA A380 First Class review and look at the difference in storage. It’s quite noticeable. The Amenity kit is provided by Liberty, along with Pajamas. British Airways has upgraded their food options, and it’s noticeable. Is it worth skipping sleep to enjoy? No. Had I been on this flight alone, I would have gone straight to bed, but you can’t fly in the nose of the 747 without enjoying some more champers, sustenance, fine wines, and scotch before sleeping for a few hours and hitting London like a First Class Zombie 🙂

The biggest challenge in dining together on BA’s 747 is the space. I could hardly sit on the buddy seat ( normally the foot rest ) and needed to shift myself sideways. This isn’t the case on most other International First Class products, but you’re on the 747 in the nose.

The service was great, seat was fine, but the experience was outstanding.  This is what points and miles are all about. Creating the opportunity to cross items off your bucket list, and enjoy things you couldn’t otherwise afford. 20k for an upgrade is a steal.  If you can find space on the LHR to ORD route it’ll be longer cause of the jetstream, plus you’ll have much better lounge access leaving London than in Chicago. It’d be my preferred route, but we weren’t flying together on the way back.

On the 747, the first class cabin itself bends inward because of the shape of the plane, so space is limited the closer you get to the front. This is the main reason I’d surmise that the storage in 1A and 1K is reduced/eliminated…there just isn’t the space to accommodate it. That’s a sacrifice I’m willing to make to fly in the nose, but I’m also a nerd about this stuff. If you want more space, but still fly in the most forward area of the 747…choose the middle seats in rows 3 or 4.

I had a great time, but it’s a short flight to really enjoy the different elements of first class – wheels up to wheels down is under 7 hours. A short night’s sleep anyways.

I think flying in the nose of the Queen of the Skies is a bucket list experience. Doing it on BA is quite attainable. It takes just 68k miles to fly from ORD to LHR and there is often quite a bit of space available. Comparing it to the other 747 nose trips I’ve completed, I’d put this squarely in 2nd. Ahead of Virgin, but behind Lufthansa. If you have the miles, and can lock down the space ( it’s greatest on LHR to EZE), Lufthansa’s 747-8 is one of the best experiences you can have.